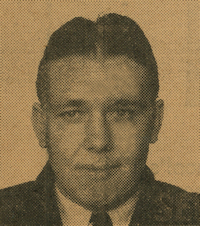 ﻿- Son of Mr. and Mrs. C. S. Pricer, is 21 years old and was born December 9, 1918 in Perry. He has always attended the Perry schools. For four years, he has played the position of tackle on the Perry high school football team, was co-captain in 1939; a member of the all-state team and all-northern teams and won a football jacket. In 1936-37 he played center on the high school basketball team; in 1938 he was a member of the wrestling squad and in 1937 he was a member of the track team. He has served as vice-president of his home room class. Eli plans to attend college some place next year.

Funeral services will be held at 10 a.m. Saturday, May 1, 1999. Rev. Lynn Scott will officiate. Interment will follow at the Grace Hill Cemetery in Perry, under the direction of Brown-Sisson Funeral Home.

Pricer was preceded in death by his wife, Maxine; one son, Eli Pricer, Jr.; his parents; seven brothers; and one sister.