During the 2016 Honor Roll Celebration the Association unveiled a special “Legacy Award” perpetual plaque to recognize those who have made a special, significant contribution to the Perry High School tradition. 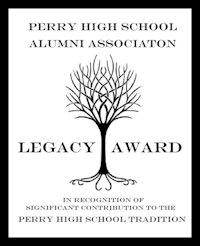 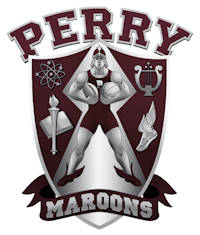 The inaugural award celebrated the 50th anniversary of the “PHS Maroon Man.” Harold Price, 1965-66 Student Council President, and Paul Ley, 1966 class member, provided their recollections of the birth of the “Maroon Man” and accepted the award on behalf of all who contributed. Many alumni from the class of 1966 were in attendance to celebrate their 50th reunion.

My memory is that Perry High School students and staff were preparing to move in to the new high school in the process of being built. The student council decided that the school needed a visual representative (mascot) for the name, Perry Maroons.

Phillip Bartlett, Paul Ley and I were sitting around playing with the idea. We came up with two ideas, a pirate and a person who represented all of the academic and extra-curricular aspects of the school. Phillip drew an incredible pirate. Paul and I drew our concept of the all-around student.

We submitted both to a committee of students, teachers and administration. Much to our surprise the committee picked the all-around student to be our mascot. The three of us really favored the pirate but, apparently there were other pirate mascots in the state.

Paul and my sketches of the all-around student were a bit rough. I was working with the Balfour representive to pick the 1966 senior ring and showed him our sketch. He took it and gave it to a Balfour artist who created a 11 × 14 final rendering. That rendering became our official mascot in 1966. We called it, “The Maroon.” 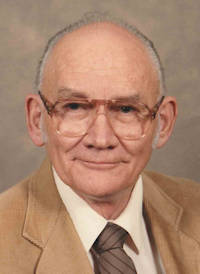 The Legacy Award for 2018 was presented to the family of the late Dr. Charles E. Martin. He graduated from Stillwater High School (1941), and from Oklahoma A&M College (1946), and completed his M.D. at OU (1948). He was committed to the education of Perry youth and was a member of the Perry Public Schools board of education 1959-74, serving two terms as president. He advocated for construction of the current Perry High School building. Dr. Martin was an active supporter of Perry Carnegie Library, serving on the board 1992-2002.

Dr. Martin was a devoted physician whose interest in treating illness and promoting good health lasted through his long career and retirement. He practiced in Perry from 1952 until his retirement in 2001. He was especially devoted to his obstetrical patients and enjoyed taking care of moms and babies. He delivered about 2,000 babies.

While serving his medical internship in 1948-49 at the University of Wisconsin, he met his future wife, Marjorie Billmeier. Soon after the Korean War began in 1950, Dr. Martin re-enlisted in the Army and became a battalion surgeon. He served in Korea for 10 months, treating wounded soldiers near the front lines and received the Bronze Star for “meritorious achievement in ground operations against the enemy in Korea.” After his Army service, he and Marjorie decided to move back to Oklahoma and chose Perry to begin his family practice.

He was active in the Boy Scouts of America as a boy and as an adult. In 1937, he attended the first Boy Scout Jamboree, held in Washington, D.C. From 1953 — 2000, Dr. Martin was active on the adult level. In 1963, he was the recipient of the Silver Beaver award, the top award given by the Will Rogers Council of the Boy Scouts.

Dr. Martin participated in many facets of community life that included: Perry Chamber of Commerce board of directors, Outstanding Citizen of the Year, Noble County Board of Health, Noble County Genealogy Society, Cherokee Strip Historical Society, American Legion Ellis-Jirous Post 53, Stagecoach Community Theatre, board director of First Bank and Trust 1959-89 and in 2007, he and his wife were parade marshals at the Cherokee Strip parade. After he retired, he could be found most days reading newspapers at the library, as well as talking with friends and checking out books. In 2010, the Perry Carnegie Library Reading Garden was dedicated to Charles and Marjorie.

The Legacy Award for 2019 was presented to the family of the late, Floyd Pratt.

Floyd W. Pratt was a highly regarded educator for Perry Public Schools from 1929-1958. Floyd was born in Nebraska, moved to Waukomis, OK, where he attended school until his high school graduation. Floyd attended Kingfisher College and the University of Oklahoma from which he later received his master’s degree. Prior to that time, he attended the University of Kansas at Lawrence where he received his bachelor of Science degree. He also took graduate work at the Oklahoma A&M College in Stillwater, OK and Chicago University.

His teaching career began in 1912, in Vinita, OK, where he began teaching mathematics and history. He also served as the High School Principal. From there he went to Tulsa where he served four years as Head of the History Dept. From 1925-1928, Floyd was superintendent of schools at Sentinel where he also taught History. Beginning in 1929, he became a member of the Perry Faculty. It was commonly thought that probably Mr. Pratt taught more subjects than any other instructor in the Perry schools. Among the subjects he taught were Botany, Zoology, General Science, Mathematics, English, Spanish, Latin, Ancient, Medieval and Oklahoma History, Physics, and Problems of American Democracy.

On May 20, 1958, the Perry Daily Journal printed the following article, “SCHOOL YEARBOOK IS DEDICATED TO VETERAN TEACHER. The yearbook was dedicated to Floyd W. Pratt, who will retire after this term to end 28 years as a teacher in the Perry School System. The book contains a full-page picture of Pratt and a tribute to his many years of service.” The dedication in the yearbook reads, “With the sincere respect, the love, and the gratitude that are so rightfully his, we proudly dedicate this 1958 Maroon Spotlight to Mr. Floyd W. Pratt. By giving of his time and service for the benefit of our school, by serving our community in aiding students in the quest for learning and good citizenship and by molding lives in the true tradition of Perry High School, he is indeed a concrete example of the effort our school is making to produce fine, useful citizens of tomorrow.”

A few comments from past students:
Ernest John Kemnitz, ’48: “Floyd Pratt was an excellent teacher with innovative teaching ideas that kept his students interested. He wrote his thesis on Garfield County. In high school he was so light that when he caught the ball, his team mates threw him and the ball into the in-zone. He must have had a good sense of humor to tell that story to his Perry students. One of the things I remember is that he gave each student in the class a map of the United States. He challenged us to do the research and find the reason for the borders of each state. Another time we studied ESP. At least once, someone came to Perry to study Mr. Pratt’s teaching methods. I have watched Jeopardy for many years. My talent for knowing so many of the answers stems back to things taught to me by Mr. Pratt at PHS.”

Frances Davison Boone, ’52: “Mr. Pratt made history interesting. I will often know about something and realize that I learned it from Mr. Pratt.”

Marvin (Buddy) Jirous, ’53: “I remember that Mr. Pratt was very likeable and would often go out to smoke with the ‘boys’”. *You have to realize that everyone smoked at that time.

Karen Ream Studebaker, ’58: “Floyd Pratt developed the Problems of American Democracy class. He was beloved by all. Fascinating! My Mother took my sister Charlotte Ream Cooper and I to his house (he was a widower) one time for some reason and he got out all his current and previous passports and talked about his many travels. A fascinating man. We were fascinated with him. He must have been in his late 70’s at that time.”

Mildred Thompson Meyer, ’59: “Yes, Mr. Pratt was my History teacher in High School. He was a small man and some students feared him, but he was a man in charge. I loved him.”

David Severe, ’52: “I remember him. He was a small man and I remember when some big football players picked him up and held him out the second story window.”

Laural Hirschman Zavodny, ’55: “I always enjoyed his classes. I remember one time when wrestlers were arriving for a tournament, and our class was more interested in looking out the window at them than paying attention in class. He marched over to the windows and pulled down all the shades!”