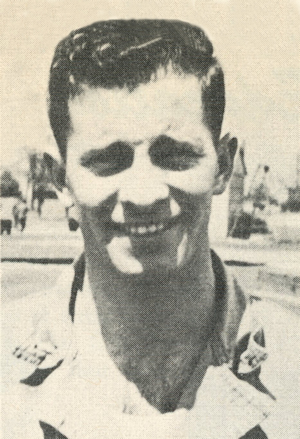 – Son of Mr. and Mrs. George Butler, was born August 9, 1918 in Emmitsburg, Maryland. He has attended schools in Perry, Okmulgee, Oklahoma City, Prague, Wisconsin and Henrietta.

While a student in Perry, he was on the wrestling squad, won a wrestling jacket, went out for athletics, and army work.

Following graduation he expects to go to college and become a tax man.

﻿Lt. George L. Butler, Jr. died on October 4 as a result of injuries received in an airplane crash in the southwest Pacific theatre of war. News of the death was received in a telegram from the war department by the service man’s wife, Mrs. Marynel Hudman Butler, who with their 17 month-old daughter resides in Oklahoma City.

Lieutenant Butler was the son of Chief Petty Officer George Butler, Sr., serving with the U. S. Navy Seabees in Hawaii, and Mrs. Butler, who also lives in Oklahoma City.

Lieutenant Butler, who was born August 9, 1918, at Emmitsburg, Md. was graduated in 1936 from Perry high school, where he was outstanding as a wrestler on the Maroon squad and as a drummer in the school band.

He received other training at Miami Beach, Fla., where he was commissioned a lieutenant in September of 1942. He was stationed at St. Louis, Mo., at Jefferson Barracks until sent overseas eight month’s ago.

Surviving the soldier are the widow, his daughter, Karen Ann, his parents, and a sister, Ellen Butler.