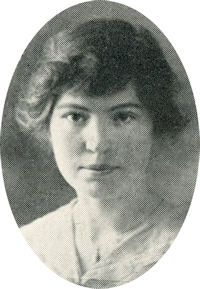 Teacher-training.
“O why does mortal man talk so much and say so little.”

Services will be at 2 p.m. Thursday in the First Baptist church with Rev. S. W. Keaton, pastor, officiating. Burial will be in Grace Hill cemetery under direction of Newton funeral home.

She was married Sept. 14, 1922, in Perry, to William Munger, who survives. She was active in the First Baptist church and served as church secretary for six years until ill health forced her to retire.