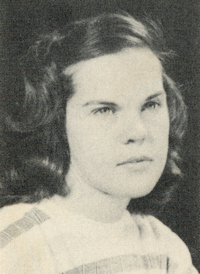 Born Jan. 30, 1930, in Perry, she was the daughter of William Munger and Edna McCracken Munger. She had made her home in the Perry and Lucien areas all her life.

A 1949 graduate of Perry high school, she was married May 28, 1949, in Perry to Charles Vernon Nelson, who survives. She had been employed at the Charles Machine Works before her illness. Mrs. Nelson also was a member of the Lucien United Methodist church, member of the Agapa circle of the church, the Lucien Garden club, Lucien Square Dance club and Happy Home homemakers group.