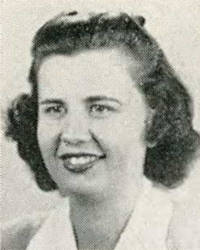 Mrs. Dotts was born June 1, 1925, at Guthrie and was the daughter of Dr. and Mrs. A. M. Crowder. She was a graduate of Perry high school and Oklahoma A&M college. She was a member of Kappa Alpha Theta, PEG and the Order of Eastern Star. Mrs. Dotts was a realtor for The Rooney Company of Tulsa.