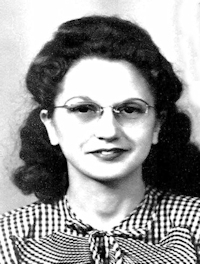 – daughter of Mrs. Opal Phillips was born in Orlando and attended schools in Orlando, Enid and Perry. She is a member of the glee club and the Red Hot pep organization. Her plans are undecided.

Sylvia Gould, 69, former long-time worker in the No­ble county courthouse, died at approximately 9 a.m. Sunday at her apartment home at 1320 Fifth street. Funeral will be at 10:30 a.m. Wednesday at Brown Funeral chapel. Burial will be at Grace Hill cemetery under direction of the Brown Funeral home.

She was a member of St. Mark’s Episcopal church. Mrs. Gould worked as deputy Noble county treasurer and also was treasurer for a short time in the period 1961-1979. She and her hus­band owned and operated Perry Iron & Supply from 1968-87.