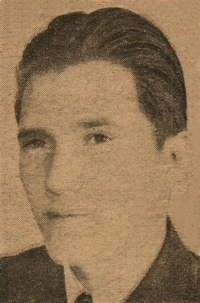 ﻿- will take a business course and then go into aviation to supplement his high school education. He was on the wrestling and tennis teams. Ross is the son of Mr. and Mrs. R. A. Johnson of 915 Elm street and is a native of Perry. He likes to play tennis and go swimming. Ross has attended only Perry schools.

Funeral and graveside services have been scheduled for Ross Albert Johnson Jr., 57, Pasadena, Texas, formerly of Perry, who died at 3:35 a.m. Monday at his home after a long illness.

Funeral will be at 12 noon Tuesday at the Colonial Funeral chapel at Pasadena. Graveside rites will be at 10a.m. Thursday at Grace Hill cemetery at Perry with Rev. M. R. Work, pastor of the First Christian church, officiating.

Johnson was born Feb. 1, 1921, at Perry. He was a graduate of Perry high school and was a member of the PHS wrestling team. He served with the United States Navy and was a World War II veteran.

Johnson was a laboratory technician for Shell Oil company until his retirement. He had lived at Pasadena about 30 years. He was a member of the Christian church.

Survivors include his wife, Marjorie, of the home; two daughters, Shirley Ann Pitnam and Taralee Kay Walden, both of Pasadena; two sons, Gary Johnson and Ross A. Johnson III, both of Pasadena; a sister, Mrs. Lorraine Etez, Houston, Texas; a brother, Lillard Johnson, also of Houston; and 10 grandchildren.