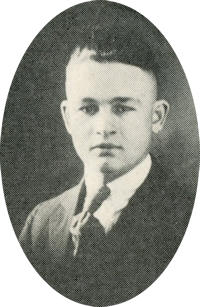 Excelsior ’20.
“He who serves well and speaks not merits more than they who clamor louder at the door.”

Lambert, the son of Edker and Edna Lambert, was born east of Perry, Dec. 6, 1901. He attended Willow Creek school and graduated from Perry high school in 1920. He attend­ed Sweeney Automotive School in Kansas City, Mo. He purchased the Sumner Garage which he operated along with a retail fuel business until his retirement in 1971.

He and Lora Benson were married on May 14, 1930. The couple lived at Sumner until his retirement when they moved to Perry. Lambert was a member of the First Christian church of Perry.