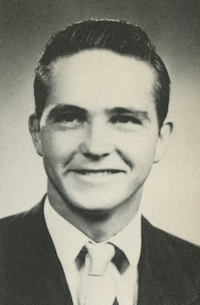 Bill Lancaster, 48, 410 Ivanhoe street, was pronounced dead upon arrival at Perry Memorial hospital at 6:10 p.m. Saturday, the victim of an apparent heart attack.

Funeral will be at 2 p.m. Tuesday at Parker-Brown Funeral chapel with Rev. Ester Bass, pastor of the Assembly of God church, officiating. Burial will be at Grace Hill cemetery.

Lancaster was born Jan. 9, 1936, at Southard, Okla. He was the son of Ted and Beatrice Lan­caster. He moved with his fam­ily to the local area in 1938 and was a graduate of Perry high school. He served with the United States Army and was affiliated with the Baptist church.

He and Erma Barnes were married April 13, 1963, at Wellington, Kan. Lancaster was em­ployed as a driller for the Gene Porter Drilling company.

Lancaster was preceded in death by his mother and one brother.