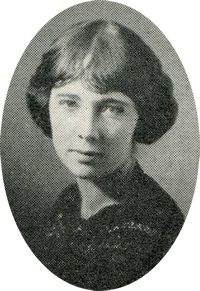 A double funeral with her husband James Ewell (Tiny) Lang, both well known in the Perry community, will be at 2 p.m. Wednesday at the First United Methodist church. In charge of the services will be Dr. Charles Sapp. The caskets will not be opened during the services. Burial for both will be at Grace Hill cemetery under direction of the Parker-Brown Funeral home. A memorial has been established for the Oklahoma Medical Research Foundation.

She was born Dec. 11, 1904, in Perry, the daughter of Charles and Icie Monroe. She was a graduate of Perry high school and a graduate of Oklahoma A.&M. college. She had taught in schools at Morrison, Perry and Shawnee.