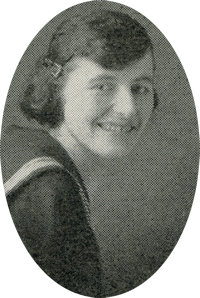 Glee Club ’20, Normal Training, P.H.S.C.A., Triangle Club.
“Who chooses me shall get what he chooses.”

Rites have tentatively been set for 1O a.m. Friday in Del City for Mrs. Brady Whitney, 69, formerly of Perry, who died Tuesday at her home in Oklahoma City of a heart attack.

The service will be under direction of Bill Eisenhour funeral home, Del City.

Mrs. Whitney was the former Muriel Lavington, daughter of the late Mr. and Mrs. Robert Lavington of Perry. She was graduated from Perry high school and attended Central State university, Edmond and the University of Oklahoma, Norman. She had been a teacher in several Noble county schools.