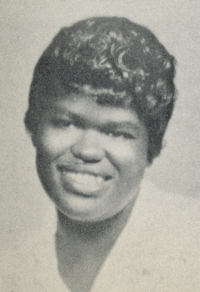 Isabell Rachel (Vester) Lawrence, 58, Perry, Oklahoma, was the daughter of Eddie and Rachel (Rhone) Vester. She was born at Perry, Oklahoma, on November 11, 1943, and died early Saturday, August 18, 2001, of injuries received in a traffic accident near Lebo, Kansas.

A graduate of Northern Oklahoma College at Tonkawa, she had been employed as a teacher at the Christ Lutheran Learning Center.

Her father, one son, two brothers, one daughter and two grandchildren preceded her in death.

Funeral will be at 2:00 p.m. Saturday, August 25, 2001 at the First Baptist Church in Perry, with Rev. Willie Anderson officiating. Burial will be in Grace Hill Cemetery under direction of Brown-Sisson Funeral Home. Memorials may be made to the charity of the donor’s choice.