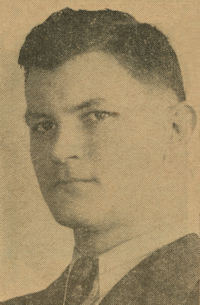 – was captain of the wrestling team and vice president of the senior class this year. He likes photography. He plans to attend the University of Oklahoma after graduation. He worked part-time in the Safeway and Fairmont stores during the past few years. He is the son of Mr. and Mrs. Paul Ryan of 707 Thirteenth street. He has always attended Perry schools and is a native of Perry. In school he participated in wrestling, track and the senior play.

Services and burial were Tuesday in Elk City for Warren Ryan, 41, Perry native and son of Mr. and Mrs. Paul Ryan, now of Mesa, Ariz.

Ryan suffered a heart attach Jan. 20, his 41st birthday, and entered an Elk City hospital then. He was fatally stricken Sunday at 5:45 a.m. in the hospital.

He was a 1939 graduate of Perry high school, and enlisted in the Navy before the U.S. entered World war II. He was stationed at Pearl Harbor when the Japanese attacked there Dec. 7, 1941. Ryan was in the submarine service during the war.

He returned to Perry after military service and attended Oklahoma State University before accepting a position with Shell Oil Co. at the Lucien gasoline plant southwest of here. When the plant was transferred to another firm, he moved to Elk City with several other Shell employees, and had been employed there since.

At Perry high school he was a member of the Maroon wrestling and football teams.

In addition to his parents and a sister, he is survived by his wife, Bobbie, of the home in Elk City.