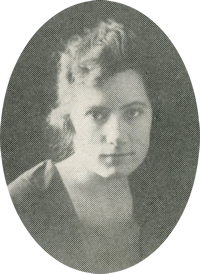 ﻿Mrs. Oscar (Creta) Mitchell, 76, 1205 Kaw street, died at 3 a.m. Saturday in Stillwater Municipal hospital where she was admitted Friday for treatment of illness.

Mrs. Mitchell was born in Perry Feb. 2, 1900, in Perry. She was married May 18, 1921, in Wichita to Oscar Mitchell, who survives. She had been a county rural school teacher 12 years. She was the last teacher of the Rose Hill school, north of Perry.

She had lived in the local area all her life. Mr. and Mrs. Mitchell are on the rolls as charter members of the Noble county Farm Bureau. She recently received her 50-year pin in recognition of 50 years of membership in the Sunny View homemakers group.

Survivors other than her husband include one son, Kenneth, Perry; a step-son, Lawrence F. Mitchell, Providence, R. I.; one sister, Mrs. Henry (Alta) Hicks, Bethany; six brothers, A. B. Clark, Harold Clark, Frank Clark and John Clark, all of Perry; and C. E. Clark and Homer Clark, both of Perryton, Texas; eight grandchildren and three great-grandchildren.