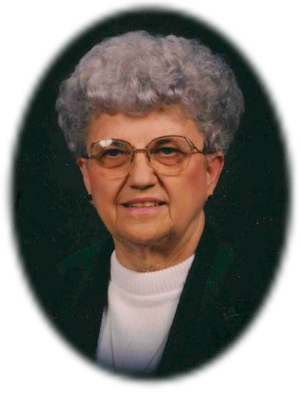 Miss Lovekamp plans to enroll at A. and M. college at Stillwater this fall.

Winifred Lee Vculek, 82, of Perry, Oklahoma, was the daughter of Fred C. and Catherine Bamberger Lovekamp. She was born on October 25, 1926 in Perry, Oklahoma and died Sunday, November 9, 2008 at the Westhaven Nursing Home in Stillwater, Oklahoma.

Winifred was a 1944 graduate of Perry High School. She attended Oklahoma A. and M. College. On July 5, 1956, Winifred married Anton Joseph Tony Vculek in Guthrie, Oklahoma. He preceded her in death on December 22, 1979.

Winifred worked at the County Extension Service for 13 years and Citizen State Bank in Morrison for 35 years. She was a member and treasurer of the Stillwater Travel Club and a member of Zion Lutheran Church in Perry. Winifred enjoyed going to work each day and being around the people of the Citizens State Bank and traveling with the Stillwater Travel Club. She enjoyed spending time with her family especially during the holiday season as she prepared a wonderful meal for all to enjoy.

She was preceded in death by her husband Tony Vculek, one sister, Helene Harrah, one nephew, Theodore Harrah, Jr. and one niece, Bonnie Feemster.