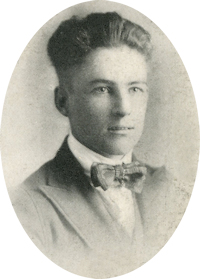 Funeral will be at 2 p.m. Wednesday at Parker Funeral home with Rev. Don Harnden, pastor of the United Presbyterian church, officiating. Burial will be at Grace Hill cemetery.

Born Sept. 28, 1901, in the Hallet community near Pawnee, Sewell came to Noble county in 1906. He was a 1921 graduate of Perry high school. He and Elva Gordon were married at Perry, Dec. 2, 1925. Sewell was a farmer-rancher and retired from that occupation in 1967. He was a member of the Presbyterian church.

In addition to his wife, of the home on route one, survivors include four sons, Joseph Sewell Jr. and David L. Sewell, both of Perry; Richard K. Sewell, Newkirk; and Dr. James G. Sewell, Guthrie; a brother, John H. Sewell, Perry; and nine grandchildren.

He was preceded in death by two half-sisters and three half-brothers.