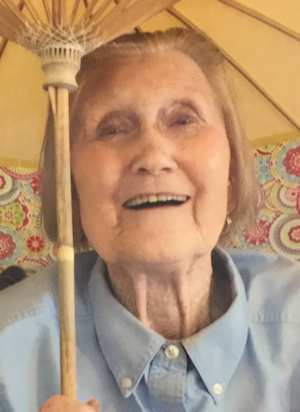 Maxine Theodora Sherrard was born in Perry, Oklahoma on June 3, 1920 as a twin to Marian Sherrard, and big sister, Marciel Sherrard. Maxine’s parents were David Theodore (Ted or D.T.) Sherrard and Angeline Sherrard. Theodore was the Perry Postal Carrier for the entirety of his work career.

Maxine grew up in Perry, Oklahoma where she attended all levels of school from Kindergarten through graduation with her twin sister, Marian, in 1938. Marciel had graduated the previous year. Maxine stayed in Perry for another year or so and then moved to Oklahoma City to attend Secretary College where she excelled. Upon graduation, Maxine became employed at the Oklahoma State Department of Agriculture (Entomology Division). She would work in this capacity until her retirement in 1981 (41 years).

As avid square dancers and world travelers, Maxine and Leland enjoy their retirement years to the fullest. Maxine loved Perry and returned as often as possible (no less than once a month for 20 plus years) until her father, Theodore, moved to Oklahoma City to live with her, Leland and the boys.
Maxine now resides in Lawton, Oklahoma at The Brentwood Senior Living Center. Outside of being wheelchair bound, she is very independent and enjoys the friends and activities that are provided daily. She especially enjoys the daily visits from family members.

Many women have done well … but Maxine has surpassed them all. Let the fruits of her labor be her reward . (Proverbs 31:29 & 31, paraphrased)