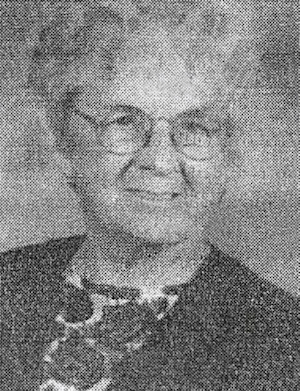 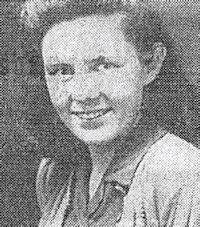 Lillian went to grade school in Helena. She also received part of her education in the Western Oklahoma Home, Helena. Her junior and senior high school years were spent in Perry schools.

Lillian is making plans to become a telephone operator when she graduates from Perry high school.

A memorial service honoring the life of Lillian May (Melugin) Zemp, 89, will be held at 1 p.m. Saturday, Jan. 5, 2013 at Perry Assembly of God Ghurch. Rev. Brett Nation will officiate, assisted by Rev. Lonnie Rutherford.

Mrs. Zemp died at 2 p.m. September 8, 2012, in a vehicle while traveling from Incheon to Daejeon in South Korea, where she had gone to visit her granddaughter, Jessica Hembree, and her family.

She was born May 10, 1925, on a farm west of Perry now covered by Perry Municipal Lake. Her parents were John and Onia (Todd) Melugin and later, she had a step father, Frank Dover. She attended Perry Public Schools and graduated from Perry High School in 1943.

On June 2, 1944, she married Paul H. Zemp at the Noble County Courthouse. The couple farmed and she raised cattle, which she continued to do after her husband’s death.

She was employed as a. cook for the Pancake House about four years, worked at The Charles Machine Works, Inc., for a number of years and enjoyed serving as a Foster Grandparent at Perry Elementary School for 10 years. She also was a childcare giver in her home for a period of time.

She lived a life that was tougher than many, but her sweetness will be missed by all who knew her.