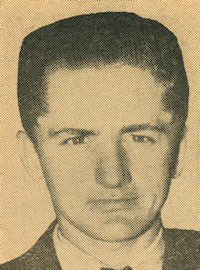 He attended school at Pioneer and Waukomis and has attended the Perry schools for the past three years.

After graduation, Bill plans to go to Colorado and learn to weld.

Graveside services will be held at 11 a.m., Monday at the Enid Cemetery, Enid, Oklahoma, under the supervision of Henninger-Allen Funeral Home.

Snow was born March 31, 1923, in Douglas, Oklahoma, to Floyd Clifford and Margaret T. (Sweeney) Snow. He graduated from Perry High School in 1941 and served as PFC US Army in World War II.

On October 1, 1947 he married Laviena Ellen Chappell in Enid. The couple made several homes while William was working with Champlin in the oil fields. In 1951 the couple settled in Wichita, Kansas. Snow worked as a maintenance supervisor.

Survivors include his wife, Ellen, of the home; son, Bill & wife Tina & their daughters, Tia & Alexandria, all of Wichita; and a brother, John, of Wichita.