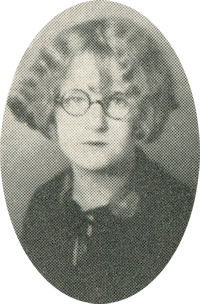 ﻿Mrs. Georgia McQuain, 70, who lived at the south edge of Perry along state highway 86, died at 4:30 p.m. Friday in Stillwater at the home of her daughter, Mrs. J. F. (Donna) Richardson.

Mrs. McQuain had been in ill health the past several months. She was born Oct. 17, 1912, in Noble county; the daughter of Jacob and Ada Stevens. She was a graduate of Perry high school and had additional schooling in Kansas.

She was married in Chandler March 12, 1932, to Martie McQuain, who preceded her in death in 1979. She had assisted her husband in operation of several businesses.

A member of the First Baptist church of Perry, she was a past president of the board of directors of the Oklahoma Lung association. She also had been active in Democrat party affairs in Noble county and served as assistant superintendent of Noble county schools in about 1948-50.