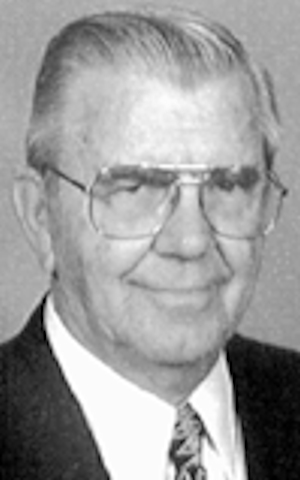 ﻿- son of Mr. and Mrs. L. M. Thele of Oklahoma City, is another of the many 17-year-old senior students in Perry high school.

He was born August 14, 1927, at Perry, and attended grade school in St. Joseph’s academy in this city. He is a member of the Catholic Young People’s association, and was active in the local student council in 1941-42.

Louis is looking forward to entering the armed forces upon graduation, with college in view afterward.

He graduated from Perry High School and went on to serve in the Navy on the U.S.S. South Dakota and the U.S.S. Lowry in World War II.

Louis was a life member of the United Brotherhood of Carpenters. He was a member of the Coronado Club where he met his future wife, Mary Claire Knisell. They were married on February 27, 1954. Their union blessed them with four children.

Louis was a member of St. Francis of Assisi Catholic Church where he served as a communion minister and as a member of the parish council. He was a life member of the Knights of Columbus and has served as Grand Knight. Louis was a master craftsman who shared his gifts with his parish, Rosary School, family, neighbors and friends. He will always be remembered for his willingness and generosity to serve in helping a neighbor, delivering Mobile Meals or organizing Thanksgiving and Christmas baskets for those in need.

Louis was preceded in death by his parents; sisters, Catherine, Gertrude, Anna, Dorthy and Francis; and brothers, Leo, Edward and James.