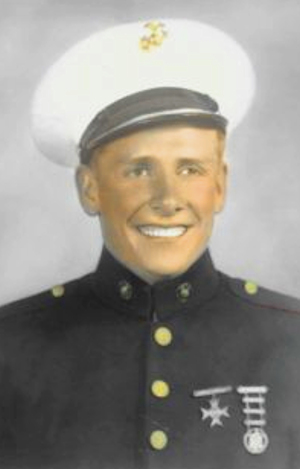 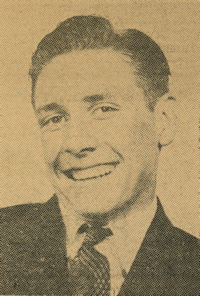 Loren has attended the Perry schools for 12 years, and has been active in football, basketball and track. He is a one-year letterman in sports and also won a manual training award during his sophomore year.

He collects match covers, spoons, pennants, and what not as a pastime.

He was born in Perry on July 21, 1923. Loren graduated from Perry High School in 1941, and soon afterward, left for California where he got a job building crates for storing lettuce and oranges. When he saw the movie “Wake Island”, it prompted him to enlist in the United States Marine Corps. He served during WWII, mostly in the Pacific and was on 19 different ships. He was in action at New Guinea, Cape Gloucester, Peleliu Islands, Okinawa, Ryukyu Islands, and China. He was awarded the Good Conduct Medal and received several citations of merit.

After his tour, Loren returned home to “dear ol Perry”. He said “it looked better than ever.” Loren considered it an honor to have served his country in the U.S. Marine Corps. After his military service, Loren worked in general construction for 45 years as a superintendent and project manager in several states for R.K. and A. Jones Construction based out of St. Louis, and then the Pynn Companies based in New Hampshire. He retired and moved back to Perry in 1990.

Loren loved to play golf, snow and water ski, enjoyed hunting and played on a semi-pro fast-pitch softball team, that made it to the fast-pitch world series, 15 years in a row. He was an avid sports fan, loved cheering for the OSU Cowboys and attended many basketball and football games in Stillwater. Loren was a long-standing member of the Benevolent Order of Elk’s and the American Legion.