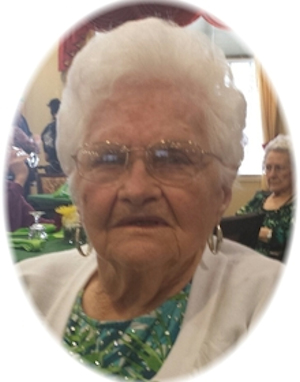 – daughter of Mr. and Mrs. E. C. Bounds, was born in Carney, Okla. She has attended rural schools, Glencoe high school and Perry high school. She is a member of the Dramatic club and was a member of the Glencoe pep club. She will attend Oklahoma A. and M. College in Stillwater next year.

Gladys Mary Bounds Presnell was born to Elmer Cleburn Bounds and Pearl Gladys Bounds (Timbers) on August 31, 1922 in Carney, Oklahoma. She passed from this world to her heavenly home on October 30, 2015 at the age of 93 years and two months. She began her early schooling in Carney and graduated from Perry High School. On September 14, 1940, Gladys married the love of her life, William W. “Bill” Presnell in Cushing, Oklahoma. They both loved telling the story of having just enough money to buy three hamburgers (two for Bill and one for Gladys) and two Pepsi’s to celebrate their marriage.

After Bill returned from World War II, both Bill and Gladys made the decision to accept Jesus Christ as their Lord and Savior and were baptized into the membership of The First Baptist Church of Drumright, Oklahoma. Shortly thereafter, in 1947 they used their savings to purchase a glass replacement business in McAlester, Oklahoma. Gladys worked alongside her husband to build a thriving business. Later she accepted a position with J.C. Penney’s working both in McAlester and later in Oklahoma City. She retired with 29 years of service in 1991.

For many years, while growing the glass business and raising her family, Gladys served faithfully as a pastor’s wife supporting her husband as he held the pastorates of Baptist churches surrounding the McAlester area. Pastorates included Canadian, Gowen, Frink, and Blocker. Gladys could most often be found sitting on the second row at every service, and was always at Brother Bill’s side greeting church members and visitors as they left the Sunday morning services.

In 1966, Bill and Gladys sold a portion of the glass replacement business and entered full time Christian ministry. They served at Meadowbrook and Immanuel Baptist Churches in Muskogee and later moved to Oklahoma City to serve at Walker Avenue Baptist and Millwood Baptist. Bill and Gladys also served as administrators for the Oklahoma Baptist Convention at the Ada Retirement Village. At the time of her death she was a member of Southern Hills Baptist Church. Without a doubt there are many on this earth and in heaven today whose lives have been changed as a result of Gladys’ faithful obedience to Christ during her life.

Easter, Thanksgiving, Christmas and family birthdays were always celebrations that were anticipated events at the Presnell household. The hospitality that she modeled is continuing to be carried on by children and grandchildren today.
In retirement, Gladys became the faithful and loving caregiver for more than twenty years for her mother, sister, Grace, and husband Bill as they all faced serious and prolonged health issues. Only after breaking both her hips did she allow her daughters to care for her.

Gladys Mary Presnell lived a full and abundantly blessed life. “Her children rise up and call her blessed; her husband also, and he praises her.” Proverbs 31:28.