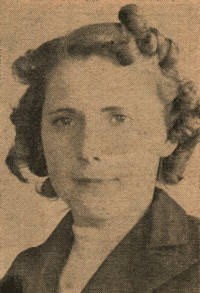 – daughter of Mr. and Mrs. F. S. Koch, of 1019 Grove Street, plans to attend Tonkawa Junior College after graduation. She leaves behind her an outstanding record of scholastic and activity achievement. She was a member of the basketball team, the glee club, the Y.W.C.A., the freshman play and the 1936 high school operetta. She was president of the class when she was a freshman. Mildred enjoys hiking, tennis and swimming. She was born at Hayward and has attended Stanton, Highview, Polo, Comar, Tonkawa Prep and Perry schools.

﻿Mrs. Mark (Mildred Marie) Feather, 43, formerly of Perry. died at 7:20 p.m. Wednesday in University hospital, Oklahoma City, where she was admitted for treatment Monday. She had been ill at her home in Pryor since April 9.

She was married in 1963 in Guthrie to Mark Feather, former manager of a Perry department store. The couple had lived in Pryor since their marriage. She was a member of the Baptist church in Pryor.

Funeral will be at 10:30 a.m. Saturday in the Parker chapel. Rev. Duane Riley. pastor of the First Baptist church of Pryor. will officiate and burial will he in Grace Hill cemetery.