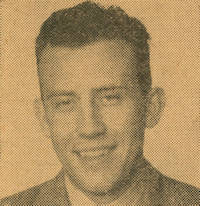 He has always attended the Perry schools and has participated in athletics and other school activities. For two years he was a member of the boys’ glee club and mixed chorus and for three years he played both right and left end on the high school football team.

Clyde Henry was recently elected Master Counselor of the local chapter of the Order of DeMolay and he is a member of the Football club. He has been moving picture operator in the high school for the past two years. He is also a member of Boy Scout Troop No. 30. His hobby is wood work in manual training. He was a member of the Northern conference football team in 1938-39.

He plans to attend Phillips University in Enid next year but is undecided just what course to take.

Johnson was born March 28, 1921 to Henry Leonard and Elsie Mae (Crowder) Johnson in Perry, Oklahoma. He graduated from Perry High School in 1940. He and W. Nadine McKeever were married May 16, 1943 and left within a few days to serve in WWII for three years. When he returned he began farming with his father-in-law and they raised a family of 3 children.

Johnson was preceded in death by his parents and a son, Kevin, in 1987.