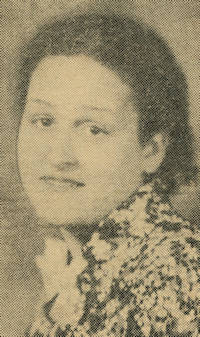 – daughter of Mr. and Mrs. H. J. Speiser of Perry, was born in Marshall on Aug. 9, 1919. She attended the elementary grades in Perry and attended high school in Perry. During her high school career she was a Red Hot. Following graduation she expects to go to a Business College in Okla. City.

Born Aug. 9, 1919 in Marshall, Okla., she was the daughter of Herman and Eva Speiser. She graduated from Perry High School in 1937 and the Mercy School of Nursing in Fort Scott, Kan. in 1941.

Mrs. Washam worked for 23 years as a registered nurse for Dr. C. W. Arrendell and Dr. Gene Arrendell at the Arrendell Clinic in Ponca City. She was a member of the Woodlands Christian Church.

She was preceded in death by her husband; her parents, and one brother.

Funeral service will be 2 p.m. Wednesday at the Woodlands Christian Church. The Revs. Paul Krueger and Leland Peterson will officiate. Burial will be in the Odd Fellows Cemetery, under the direction of E. M. Trout and Sons Funeral Directors.