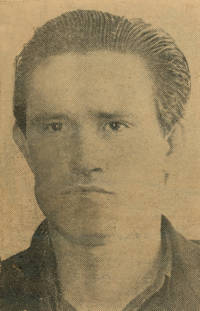 – likes to hunt and fish. His parents are Mr. and Mrs. Max Kling of near Red Rock. He will graduate with a record of having attended Red Rock and Perry High Schools.

Charles worked for the National Youth Administration and at odd jobs during his high school terms. He intends to follow the mechanics trade following graduation.

﻿Charles Gates, 48, 102 Ash street, died at 8 a.m. Friday in the Veteran’s hospital in Oklahoma City. Gates had been in ill health for the past year and a half.

Gates was born in Perry on August 1, 1920 to Charles Gates and Nancy (Upperman) Gates-Kling. He graduated from Perry high school in 1939. He was mobilized with the local national guard in 1940 and served during World war II in Europe.

On February 2, 1946, he and Sarah Mae Hurst were married in Winfield, Kansas.

Gates was on the staff of the Perry school system before his employment as a custodian for the post office May 30, 1959.

Survivors include his wife, Sarah, of the home; two daughters, Mrs. Karen House of Tulsa and Connie of the home; one grandchild; one sister, Mrs. Bertha Koch of Hot Springs, Ark., and two brothers, Lawrence Kling, Wayne, Mich., and Roland Kling, Perry.

Funeral services will be at 10 a.m. Monday in the Newton chapel. Rev. James Lambert, pastor of the First Christian church, will officiate and burial will be in Grace Hill cemetery. The family has suggested those who wish may make contributions to the Oklahoma Medical Research Foundation.