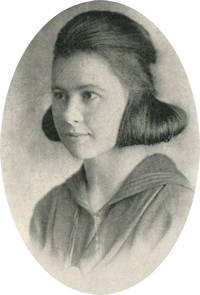 Ms. McGehee was the daughter of John Lee and Rebecca E. (Hill) McGehee. She was born on a claim north of Stillwater that was staked by her father during the Cherokee Strip Run of 1893. When she was 10 months old, she and her family moved to Perry where her father operated a livery stable and became the first elected sheriff of Noble county.

In 1913, the family moved to a farm on the Otoe reservation near Red Rock. She received her elementary and high school education in Perry and Red Rock and earned a bachelor of arts degree from Oklahoma State university and a master of arts degree from the University of Southern California at Los Angeles.

Ms. McGehee taught 44 years, 11 of which were in Red Rock and Marland. She taught the remaining 33 years in the Ponca City school system, most of which were in the English department at East junior high school.

In November, 1977, she moved to Stillwater to be near her family. Ms. McGehee was a member of the First United Methodist church of Ponca City, the Ruth group, Payne County and Oklahoma Retired Teachers associations, National Education association and the American Association of Retired Persons.

Her parents, two sisters, one brother and one nephew preceded her in death.