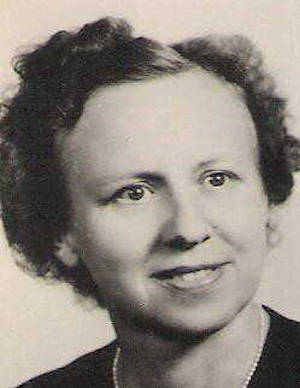 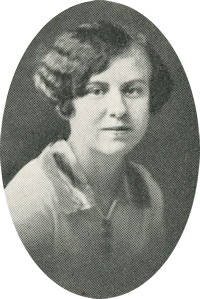 “Still they gazed and still their wonder grew
that one small head could carry all she knew.”

The daughter of Henry Leonard and Elsie Mae (Crowder) Johnson, she was born February 16, 1909, in Ponca City, Oklahoma. She graduated from Perry high school in 1927 and Central State College in 1936. She did graduate work at UCLA, University of Colorado, and University of Arizona.

In June, 1937, she and John William Korn were married in Perry. They moved to Guthrie in 1954 where she was an elementary school teacher. She was a member of OEA and NEA.

She was a member of First Methodist Church, Guthrie.

The following essay was written by Opal Johnson, Perry high school junior, and was awarded first prize in the Journal prize essay contest.
Printed in The Perry Journal on Thursday, November 26, 1925

“Why Perry is a Good Place to Live”

A pistol shot marked the opening of the Cherokee strip. September 16, 1893. To this day the celebration of the sixteenth is a yearly gala day in honor of the establishment of this thriving city, Perry.

Thirty-two years ago the present townsite of Perry was a part of a vast, unbroken prairie, and unknown on the map as a geographical location. In less than a year from the time of the opening and establishment of this “tented city,” Perry had outgrown her swaddling clothes and the original townsite proved inadequate for the needs of the growning city. Addition after addition was pltted and sold to take care of its growth.

The growth of Perry has not been of the much-room type. From the very beginning the expansion has been steady, always forward.

The city can well take pride in its municipal improvements, having mile of paving throughout the business and residence sections; telephone, telegraph and electric services are also found here.

The Fire Department ranks among the best in the state. The two fire trucks have equipment necessary for any emergency.

The business district of Perry is built around a five-acre square. A park is located in the center of the square within which is the post office, built of native stone, a Carnegie Library and a white stone court house with every modern appointment and convenience. The city park is considered one of the most beautiful in the state and is the envy of neighboring cities.

One of the building of which Perry is justly proud is the Masonic Temple. A motion picture show and a drug store are on the first floor. On the second there is a large auditorium, and a beautiful lodge room is on the thrid floor. Offices are scattered throughout the building.

The city water supply, furnished by two reservoirs assures a water supply adequate for the needs of a city more than five times the size of Perry.

In regard to fuel, the city is supplied with natural gas from wells a short distance from town.

Better schools have long been one of the chief goals toward which Perry has struggled. The High School, with a faculty of experienced teachers, is one of the most efficient in the state. An average of sixty students graduate from Perry High School every year.

Perry has more than ten church denominations. Three of these unite during the summer months for the evening services. No one wants to live where there are many non-church goers, as they expect a bad influence.

The Chamber of Commerce is the “hub” of Perry and is composed of progressive men and women. Another prominent organization is the Civitan club. They advocate friendship as proven in their visits to neighboring towns.

With the recent oil and gas development the Perry area has been brought to the front and is eagerly watched by the oil men of the United State.

Every young man or old man, rich or of mederate means, who seeks a wide-awake city with every reason for growth and advancement; for a home of culture, moral citizenship and good men and women — Perry offers that opportunity.