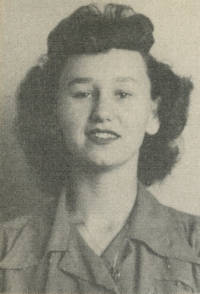 On December 6, 1946, she and John D. Cable were married. They had one daughter, Jonetta Sue Holt, who survives.

The Daily Oklahoman/Oklahoma City Times November 24, 1993
Winner of the week’s “Did You Hear….” contest of a real-life story in 300 words or less.

It was summer, 1942, I was 11, and World War II was in full force. My brothers Rex and Drury Gillihan and brother-in-law Johnnie McCullough were in the service. Rex was missing in action. Our radio was never turned off, as we followed events of the war.

Our hometown, Perry, was a wonderful place to grow up, but it didn’t offer many jobs for the very young. I went to see our Daily Oklahoman distributor, Mr. Farris, and begged him to let me deliver papers. Finally, he said yes.

Every morning I got up at 3 o’clock, rode my bicycle to his office, folded my papers and delivered them. It was a wonderful experience for an 11-year-old. (Also, I was rich!)

Rex came home. He had been taken prisoner on Corrigidor, made the Battan death march on crutches made of tree limbs (due to being shot several times in both legs) and had been shipped to Osaka, Japan. Drury came home from the Navy. Johnnie made it through the Battle of the Bulge.

They were all such honorable men and loved their country.

Later, I met my future mate. Proudly, we went to meet my future in-laws. There was a moment of silence when my future sister-in-law said, “Oh, yes, we know her. She used to be our paperboy!”

I wonder how many paperboy girls The Oklahoman had back in those days.