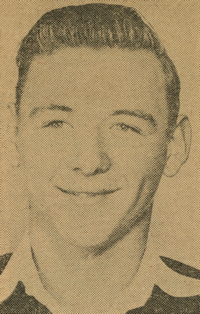 ﻿- 17-year-old son of Mr and Mrs Earl Bechtold, of this city, was co-captain of the Perry high school football team during his senior grid season.

Jack was born on November 22, 1923, in Perry, and attended the Hunter rural school for two years, before starting to school here.

He is a three-year letterman in basketball and football, and was selected as an all-conference back as the result of his activities in the Northern football conference during the past year. He also was a member of the Maroon basketball team which won two conference championships last season an unprecedented record. Jack appeared in the junior class play.

He has not decided what he will do after graduation.

Graveside rites are set for 10 a.m. Wednesday at Grace Hill cemetery at Perry. Rev. Lynn Scott, pastor of the First Christian church of Perry will officiate. Arrangements are under direction of Brown Funeral home.

Bechtold was born at Perry, Nov. 22, 1923, the son of Earl and Gladys Bechtold. He was a Perry high school graduate.

He had lived in Houston since 1971. A veteran who served with the United States Navy, Bechtold was an engineer. He was a member of the Christian church.