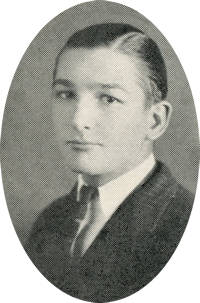 “His life was gentle and the elements so mixed in him that nature might stand up and say — this is a man.”

Services will be at 3 p.m. Thursday in the Perry First Methodist church for Henry Mugter, 61, son of a pioneer area couple, who died Monday in a Houston, Texas, hospital following surgery last Friday.

Rev. Clifton McKoy, minister of the city church, will officiate at last rites and burial will be in Grace Hill cemetery under direction of Newton funeral home.

Mugler was born on a farm near Orlando on May 9, 1906, to Mrs. and Mrs. Fred Mugler. He graduated from Perry high school in 1924 and continued his education at the University of Oklahoma. He was a member of the Jazz Hounds, a university pep organization, served as editor-in-chief of the 1928 Sooner yearbook, and was elected to Alpha Kappa Psi national professional business fraternity, and Chi Chi Chi, an honorary junior-senior fraternity, where selection is based on scholastic standing, activities and prominence on campus. Mugler graduated from the University of Oklahoma in 1928.

Mugler and the former Thelma Aloyise Wilson were married. They have made their home in Houston since 1943.