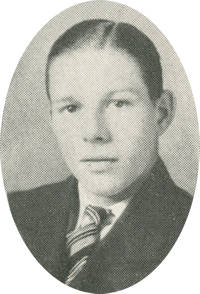 “He’s not so good in a crowd, but when you get him alone.”

Mr. William (Bill) F. Mugler of Calgary, passed away peacefully at the Glenmore Park Auxiliary Hospital on Sunday, November 23, 1997, at age of 88 years.

Born in Noble County on April 20, 1909, he was the son of Mr. and Mrs. Fred. Mugler. He graduated from Perry high school in 1927 and continued his education at the University of Oklahoma where he received his degree.

Mugler and the former Anna L. Miller were married September 17, 1947. They lived in Shreveport, Louisiana, for a time before moving to Calgary, Alberta, Canada. “Annie” preceded him in death in 1965.

Funeral Services will be held at the McInnis & Holloway’s Park Memorial Chapel, on Friday at 3 p.m. If friends so desire, memorial tributes may be made directly to the Alzheimer Society of Calgary. In living memory of Bill Mugler, a tree will be planted at Fish Creek Provincial Park.