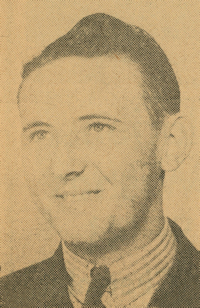 He attended school in Tulsa, Guthrie and for the past five years has attended the Perry schools.

He served as a member of the student council during his sophomore year.

He plans to go to an aeronautic school and study mechanics.

He worked for the Oklahoma Tax Commission as a sales tax auditor retiring in 1984. George was a member of the Midwest Blvd. Christian Church. George married Wanda D. McFarland on Sept. 27, 1942 in Jacksonville, FL.

He was preceded in death by his parents. The family will greet friends and relatives Thursday, 10/30/2003 between 6-9 PM at the funeral home. Graveside services will be held 11:00 AM Friday, 10/31/2003 at the Arlington Memory Gardens Cemetery.