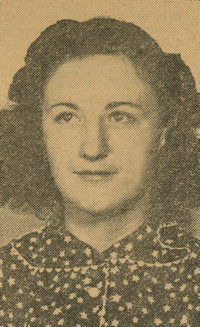 She attended Lawn View rural school and Hayward high school, and has attended the Perry high school for the past three years.

Hobbies are playing the piano and dancing.

Laura plans to live in Ponca City with her sister and to find employment either there or in Newkirk after her graduation.

Funeral was Tuesday afternoon at the Community Christian church in Ponca City for Laura L. “Polly” Murphy, 72, a former resident of the Perry area.

She was born Aug. 5, 1923, near Perry. Her parents were Bernard and Ica Dora (Parker) Hamblin. She was a 1941 graduate of Perry high school.

On Feb. 7, 1942, she and Carl James Murphy were married in Lawton. The couple moved to Ponca City in 1945. Mrs. Murphy was employed at McDonald’s Department Store, the Homer Luther Music Store and Rich’s Bakery. She was a member of the Community Christian church.

Mrs. Murphy was preceded in death by her parents, two sisters and one brother.