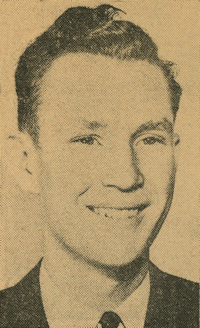 He appeared in the junior and senior plays and in the operetta “Pickles.” He also has participated in basketball, but considers reading, hiking, and stamp collecting his favorite pastimes.

Paul has been manager of two winning football queen candidates, a member of the honor society, a delegate to the Central State student council convention at Ponca City, and has received the student council award.

He played in the mass band at the Enid tri-state festival for two years and was a Cub Scout leader for one year. He plans to enter college next year for the study of medicine.

Dr. Paul Craig Laird, member of a pioneer Perry family, died Tuesday night, Nov. 24, 1992, in the Irving (Texas) Community hospital, where he had been a patient several months.

Services will be at 2 p.m. Friday in the First Baptist church of Dallas.

Dr. Laird, a surgeon, was a 1941 graduate of Perry high school and a veteran of the Korean war. He was the son of the late Mr. and Mrs. Paul S. Laird, and his paternal grandparents were Mr. and Mrs. S. E. Laird who were prominent in the early settlement of this area.

Dr. Laird had retired from his practice in Irving, Texas, when he suffered a heart attack and a stroke last spring. He had been in the Irving hospital since then.