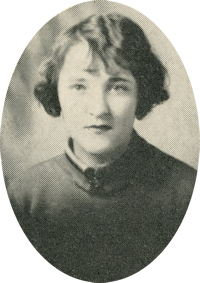 “Tho vanquished, she could argue still.’

Born February 12, 1909, in Orlando, Oklahoma, she was the daughter of Ednie Veoria and Anna Louise (Zeller) Nida.

She and Melvin Frank “Ted” McCoy were married December 11, 1926 in Dover, Oklahoma. She graduated from Perry high school the following May, 1927.

She is survived by a daughter, Theda Rae Power of Abilene, KS.