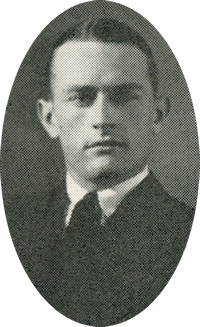 “Ain’t so ambitious as I used to was.”

Services will be at 2:30 p.m. Friday in the First Presbyterian church for Robert J. Coyle, 49, who died Wednesday at 1 p.m. at his home here, 724 Holly street, following a six-month illness.

Rev. John A. Westin, pastor of the Presbyterian church, will conduct last rites. Burial will be in Grace Hill cemetery under direction of the Newton funeral home.

Coyle, son of a pioneer Oklahoma couple, was born November 1, 1903, in Perry. His father, the late E. J. Coyle, founded a cotton gin business in 1893 which now includes gins at Perry, Pawnee, Morrison and Skedee. Robert Coyle had been active in operation of the Perry gin for nearly 30 years.

Coyle attended Perry schools, graduating in 1923, and was a four-year letterman in football at PHS. He later attended Oklahoma A.&M. college and the Universtiy of Oklahoma before entering the cotton gin business here. He was married May 15, 1927, in Chickaska, to the former Beulah Unzicker, who survives.

Coyle was a ruling elder of the First Presbyterian church, a member of the Rotary club and the local Masonic lodge. He was active in many civic affairs.