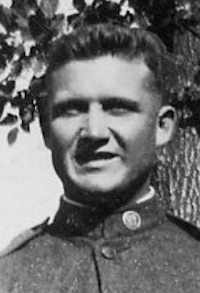 W. B. (Bill) Ringler, 58, Perry school board member and leather good dealer, died at 5:10 a.m. Friday in Perry General hospital, where he had been under treatment two weeks after suffering a heart attack.

Services will be at 10 a.m. Monday in the First Methodist church, with Rev. Bervin Caswell, pastor, officiating. Burial will be in Grace Hill cemetery under direction of the Parker funeral home.

Ringler was the son of a pioneer Perry couple, Mr. and Mrs. Barney Ringler. He was born Sept. 15, 1894, in a tent on the corner of Fifth street and Fir avenue, when Perry was not quite one year old. His father operated a shoe shop on the east side of the square in the earliest days of the city.

Ringler attended Perry schools and was employed by the Clint Davis harness shop before going into business at 606 Cedar street, south side of the square. He had operated a leather goods store there many years.

His wife, the former Dolly Wadsworth, died in 1933. Ringler was a veteran of the first World war and a member of the Methodist church.