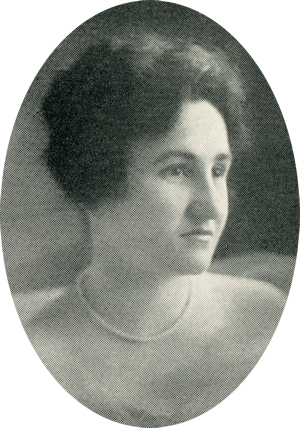 “Speed and efficiency go together.”

Mrs. Marguerite Edson, daughter of a pioneer Perry family and former principal of Perry high school, died at 12:30 a.m. Tuesday in St. Joseph, Mo., where she had been staying the past several months.

Services will be at 10 a.m. Thursday in the Newton funeral chapel, with burial in Grace Hill cemetery.

Mrs. Edson was born in Sioux City, Iowa, and came to Perry in 1893 with her parents, the late Mr. and Mrs. A. Kraemer. Her father opened a shoe store and bootery here Sept. 16, 1893, when the Cherokee Strip was opened to settlement. Mr. and Mrs. Edson have continued operation of the store since then. The firm is one of very few in the Cherokee Strip still owned and operated by the founder’s family.

She was married Sept. 26, 1919, in Perry, to Emmett Ottis Edson, who survives. She was a graduate of Perry high school and Oklahoma A.&M. college, where she was a member of Kappa Alpha Theta social sorority.

Mrs. Edson was active in the leadership of the Perry Church of Christ, Scientist, and was a member of the American Legion auxiliary and the Order of Eastern Star. She had taught school in Red Rock and Billings before coming to Perry as principal of the high school. Since 1928 she had been active in management of Kraemer’s store here.

In addition to her husband, survivors are a sister, Mrs. A. M. Crowder, Perry; three brothers, Richard H. Kraemer and F. A. Kraemer of Perry, and E. R. Kraemer of Kansas City, Mo.; a niece, Mrs. W. R. Richardson of Baton Rouge, La.; and three nephews, Forrest Kraemer of Shidler, Jack Kraemer of Midland, Texas, and Bob Kraemer of Perry. Mr. and Mrs. Edson had reared the three nephews and niece from childhood.

A son preceded her in death.