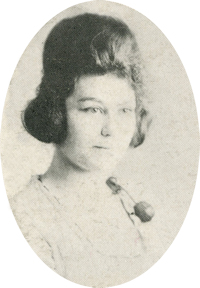 Funeral will be at 2 p.m. Saturday at the First Presbyterian church. Rev. Jim Murray, interim pastor, will officiate. Burial will be in Grace Hill cemetery under direction of Brown Funeral Home. A memorial has been established to benefit the Arthritis Foundations.

Mrs. Shea was the daughter of Samuel and Maudie (Speakman) Knori and was born at Perry on Feb. 10, 1904. She was a graduate of Perry high school. She and John Shea were married at Perry on January. 29, 1927. Her husband preceded her in death in October, 1971.

She was a member of the First Presbyterian church and Royal Neighbors of America.

Among survivors are one son and daughter-in-law, Bob and Pat Shea, Graham, TX; a daughter and son-in-law, Evelyn and Harold Meeks, Stillwater; seven grandchildren, 16 great-grandchildren and one brother, Wayne Knori, Perry.

In addition to her busband, Mrs. Shea was preceded in death by two brothers and two sisters.