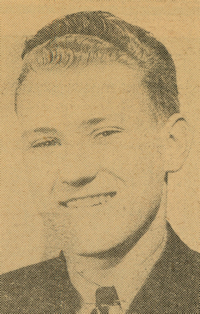 He started school in the first grade at Fort Worth, Texas, and has attended school in El Reno, Cushing and Perry. He has been a student in the Perry school for four years.

Bob is a two-year letterman in both football and basketball, and is one of the members of the basketball team which won both the Northern and Northern Six conference crowns this past season. He appeared in the senior play.

Bob plans to attend the Oklahoma A. and M. college next year.

He was born Sunday, December 17, 1922, in Winfield, KS, to Rev. Percy W. Beck and Ethel Estelle Benneth Beck. He married Corinne Roberts on June 17, 1949 at Alva, Oklahoma. He grew up in the El Reno, Cushing, and Perry area, and graduated from Perry High School.

He spent four years in the U.S. Navy as an aircraft mechanic during WWII. He then received his BA in math from Northwestern State University, and his master’s in Education Administration from the University of Oklahoma. He spent his career as a coach, math teacher, and school administrator in Buffalo, El Reno and Yukon before retiring in 1981.

He is survived by his wife Corinne, of the home; daughter, Gayla Beck Engel, Dallas, Texas; sons, Stephen L. Beck, Tulsa, OK and Alan V. Beck, Edmond, OK; and eight grandchildren. He was preceded in death by his parents, 3 brothers, and 1 sister.