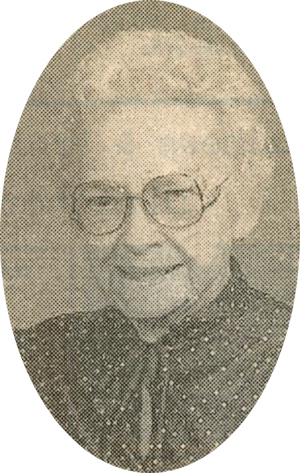 Services for Mrs. Luthye were held on Tuesday, March 12, 2002, at 10:00 a.m., at the Cedaredge Seventh-day Adventist Church with Pastor Lloyd Austin and Pastor Mike Kissner officiating. Arrangements were under the care and direction of Taylor Funeral Service and Crematory. Graveside services will be at 10:00 a.m. Friday, March 15, 2002 at Grace Hill Cemetery in Perry, OK under direction of Brown-Dugger Funeral Home. The Rev. Lonnie Rutherford will officiate.

Vera Grace Luthye was born on February 18, 1907, to Thomas J. and Minnie (Williams) Baker on the family farm just northwest of Perry, OK.

She spent her childhood in Perry and attended Fremont School and graduated from Perry High School in 1926. She went to Northern Oklahoma College and graduated from the University of Central Oklahoma at Edmond in 1955 with a Bachelor’s of Science Degree in elementary education.

Her first teaching career began in the rural schools in Noble County for 14 years, then to Pikes Peak, Hunter, 4D, and Fremont Schools.

Vera married Louie Luthye on July 22, 1931 at Ponca City, OK. They lived in Grand Junction, CO for a short time before returning to Perry, OK where they resided on the farm caring for Vera’s parents until their death. Louie died in January, 1996.

Vera taught fifth and sixth grades in Colbran, CO in 1944 and 1945 while her husband was in the Navy during World War II. After his tour of duty they returned to the farm near Perry.

In 1956, they moved to Cedaredge, CO where she obtained a teaching job for one year in Delta. She spent the next 14 years at Cedaredge Elementary before retiring in 1971. She loved her “Kids”.

After retiring, she worked several years as a service volunteer at the Senior Citizens Center meal site in Cedaredge.

She loved her Lord and her church. She dearly loved the mountains, beautiful music, animals and her friends. She also enjoyed crocheting and textile painting.

Memorial contributions may be sent to the Cedaredge Seventh-day Adventist Church, P.O. Box 656, Cedaredge, CO 81413 or the charity of one’s choice.