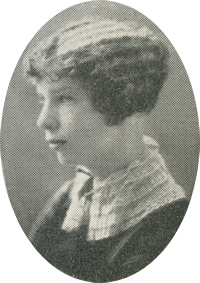 Services were Tuesday in McAlester for Mrs. Bill (Maxine) Edwards, 59, of McAlester, formerly of Perry, who died Sunday in a McAlester hospital.

Mrs. Edwards was born Aug. 9, 1911, at Hinton, Okla. She moved to Perry with her parents, the late State Sen. and Mrs. S. J. Trussel, when three years old. Mrs. Edwards graduated from Perry high school in 1928 and attended Oklahoma State university, where she was a member of the Kappa Delta social sorority.

On Jan. 14, 1934, she was married to William J. Edwards, promotion manager of McAlester.

Mrs. Edwards was active in affairs of the First Presbyterian church and AT chapter of the PEO sisterhood.

Survivors include her husband and one daughter, Miss Mary Frances Edwards, Portsmouth, N.H.