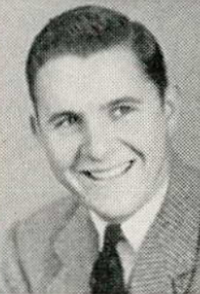 His hobbies are sports and scrapbooks.

King is the son of Mr. and Mrs. King Montgomery of 636 Grove street and was born at Altus in 1921. He attended schools in Cherokee before coming to Perry.

He plans to attend either the University of Oklahoma or A. and M. College at Stillwater and study business administration.

Born June 17, 1921, in Altus, Okla., he was the son of King Wesley and Florence Mabel (Loud) Montgomery. He graduated from Perry high school in 1939 and attended Oklahoma University where he majored in Business Administration and was a member of Phi Kappa Psi.

While at Oklahoma University Montgomery trained with Battery “F”, Second Field Artillery unit. He enlisted Sept. 16, 1942, and served in World War II until his release on Feb. 19, 1946.

In 1945 Montgomery and Evelyn Martin were married Philadelphia, Pennsylvania.