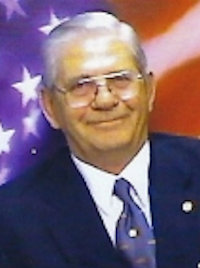 C. LaVaughn Lawson, longtime resident of Perry, Oklahoma passed away peacefully on Wednesday, May 22, 2019 in Perry surrounded by his loving family. Funeral services have been entrusted to the care of Dighton-Marler Funeral Home of Perry.

Visitation will be 9AM to 8PM Wednesday, May 29, 2019 at Dighton-Marler Funeral Home. Family will greet guests from 6PM to 8PM at the funeral home. A Celebration of LaVaughn’s life will be held on Thursday, May 30, 2019 at 2PM at the First Christian Church in Perry with pastor Josh Bell officiating. Interment will follow at Grace Hill Cemetery in Perry.

LaVaughn was born April 27, 1933 in Oklahoma City, Oklahoma to Ernest Albert, Sr. and Della Marie (Stevens) Lawson. He grew up in Perry and graduated a Maroon of Perry High School in 1951. He joined the United States Navy in July 1950 and served his country for three plus years. Upon completion of his enlistment he worked for Halliburton Co. for four years. After several harrowing experiences on the job, he decided to rejoin the Navy in October 1958, applying for Submarine School and qualifying, served on USS Sea Poacher and USS Mackerel in Key West Fla. during the Cuban Crisis. Upon recommendation for Warrant Officer he was promoted to WO1 and attended school to become a Deep Sea Diver. He served as Chief Bosun on USS Florikan in San Diego and USS Penguin in Key West in charge of salvage operations. He retired in 1975 after a tour in Washington D.C. as instructor at the Navy Diving School and a tour at Pearl Harbor in charge of the Escape Training tank for divers.

LaVaughn and Jandryd Casey were married May 26, 1952 at the University Christian Church in Enid, Oklahoma. They were blessed with 66 wonderful years of marriage.

He was a member of the I.O.O.F Lodge #27 for 40 plus years, during which time he served his lodge in many offices and in all elected offices at the State level, going on to serve the Order as Sovereign Grand Master in 2005. He was also a member of the Perry Rotary Club.

Working in the yard, watching TV, reading, and playing Solitaire were all favorite pastimes of LaVaughn’s during his later years. After retirement he worked for Kathy Lewis and David Dolezal as Deputy County Assessor, during which time he got to know many people in the county.