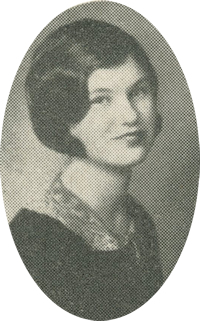 Death Tuesday morning claimed Mrs. Raymond Pfrimmer of Garber, former resident of Perry and a graduate of the Perry high school. Mrs. Pfrimmer died in the Baptist hospital in End. Her infant daughter preceded her in death a few days ago.

Mrs. Pfrimmer would have been 27 years of age September 21. She was born in Perry and lived in Noble county until several years ago when she moved with her husband to Garber. She is the daughter of Mr. and Mrs. J. F. Jackson of northwest of Perry.

Mrs. Pfrimmer was married in Enid November 25, 1929. She was a member of the Christian church in Perry and graduated from the local high school with the class of 1929.

Besides her widowed husband she is survived by one daughter, Dona Rae, her father and mother, Mr. and Mrs. J. F. Jackson, and two sisters, Mrs. Frances Murphy and Mrs. Frank Buffington, both of Perry.

Funeral services will be held at 2:30 Thursday afternoon in the Christian church in Perry with Rev. Jack Oliver, pastor, officiating. Burial will be in the Polo cemetery with the Davis funeral home in charge.