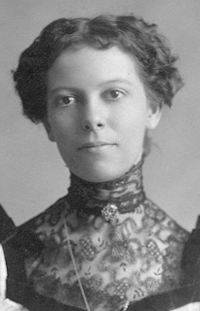 Mrs. Lizzie Eisenhauer, 77, 828 Cedar street, died unexpectedly at 6:20 a.m. Saturday in Perry Memorial hospital where she had been a patient since May 29.

A long time resident of Perry, Mrs. Eisenhauer was born January 13, 1884, in Seneca, Kansas. She came here in 1893, with her parents, the late Mr. and Mrs. Noah Boright. Mrs. Eisenhauer attended Perry schools and was a member of one of the city’s first high school graduating classes. She taught school here before her marriage June 26, 1907, to Herman Eisenhauer, who preceded her in death.

She was a member of the Presbyterian church, a charter member of the Esther Rebekah Lodge #9, and also held membership in the Past Noble Grand Club, Royal Neighbors of America and the Order of the Eastern Star.

Services will be at 10 a.m. Tuesday in the First Presbyterian church. Rev. Ernest Ackerman, minister of the Presbyterian church, will officiate at last rites and burial will be in Grace Hill cemetery under direction of the Newton funeral home.