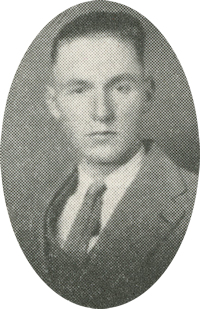 Funeral will be at 10 a.m. Tuesday at the First Baptist church of Ponca City. Rev. Stephen Earle and Rev. Evans T. Moseley will officiate. Burial will be at Resthaven cemetery at Ponca City under direction of E. M. Trout and Sons Funeral home.

He was born Oct. 2, 1910, at Terlton, the son of Clarence and Matilda Edgar. He was a 1929 graduate of Perry high school and attended Northern Oklahoma college at Tonkawa. In 1934, he moved to Ponca City and became an employee of the Civil Conservation Corps.

He later was an employee of Cities Service and Conoco and retired in 1972. After his retirement, he worked part-time at NOC. He was a member of the First Baptist church of Ponca City and the Herald Sunday school class.

He and Iola Swearingen were married in 1935 at Winfield, Kan., and she survives. Other survivors include a dauther, Mrs. Ron (Jody) Bruce, Houston, Texas; a sister, Mrs. Dick (Lucille) Foster, Perry; one granddaughter and several nieces and nephews.